Mark Tribe
Mark Tribe is an artist, curator and educator whose interests lie at the intersection of emerging technologies and contemporary art. He is Director of Art and Technology at the Columbia University School of the Arts. In 1996, he founded Rhizome.org, an online platform for the international new media art community, and served as Rhizome’s Executive Director until mid-2003. He remains on the Rhizome.org board of directors and also serves on the boards of ISEA, the Inter-Society for the Electronic Arts, and the New Museum of Contemporary Art in New York City. His most recent art project, Revelation 2.0 , was commissioned by Computer Fine Arts. Recent curatorial projects include Agenda for a Landscape, a new media installation by Leah Gilliam at the New Museum of Contemporary Art in New York City, and the computer art section of Game Show, an exhibition of artist’s games at MASS MoCA in North Adams, Massachusetts.
http://www.rhizome.org

Mary Flanagan
Mary Flanagan teaches at Hunter College in Manhattan and lives and works in New York. She holds an MFA from the University of Iowa and studied film studies and experimental filmmaking. Currently Flanagan’s projects focus on networked and computer based art and installation, popular culture, and computer gaming. Flanagan’s work has been shown internationally at venues including the the Whitney Museum of American Art 2002 Biennial, Ars Electronica, New York Hall of Science, and galleries/events in Spain, the UK, Norway, Japan, Denmark, Canada, Australia, France, Italy, Slovenia, and the US. Flanagan’s essays on digital art, cyberculture, and gaming have appeared in periodicals such as Art Journal, Wide Angle, Convergence, and Culture Machine, as well as several books. Her co-edited collection Reload: Rethinking Women + Cyberculture was published by MIT Press in 2002, and reskin is due in 2004. She is also the creator of “The Adventures of Josie True,” the first web-based adventure game for girls, and is collaborating on a new project to teach middle school girls computer programming.

Kai-Peter Baeckman
Kai-Peter Baeckman started programming demos and games on the Amiga in the eighties. A fascinating hobby turned into a career when he founded Mistaril in 1996 to make Java games and applications.In 2001 he started researching the viability of independent game development using the internet as the main distribution channel. The first title, Space Station Manager, was completed in February 2003 and subsequently published and distributed by Mistaril. The game has been selected as a finalist in the Independent Games Festival 2004, in San Jose, CA.

Ewan Hennelly (aka Herv)
Ewan Hennelly, aka Herv, has become one of Ireland’s better-known electronic musicians in the past three years, amassing a considerable catalogue of releases on labels both at home and abroad. Working with a laptop and a Nintendo Gameboy running custom software, Herv’s music is a frantic swarm of 8-bit melody and syncopated percussion, punctuated by warm accordian and layered violin and cello lines. Hailing from New Ross, a move to Dublin to study and a chance meeting with Tom O’Doherty spawned their label Compactrisc, on which several Herv releases have appeared. Working closely with filmmaker Conor Ryan, videos for several of Herv’s releases have also been produced and aired on the Irish alternative music show No Disco, as well as being screened as part of the Dublin Electronic Arts Festival Blind Screenings, “documenting the evolution of music video ideas for leftfield music in Ireland” 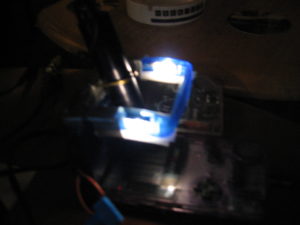